Hitman Blood Money is a 2006 stealth video game developed by IO Interactive and published by Eidos Interactive. It was released in May 2006 for Microsoft Windows, PlayStation 2, Xbox and Xbox 360. It is the fourth installment in the Hitman video game series, serving as a sequel and partial prequel to Hitman: Contracts.

Blood Money follows the life of hitman Agent 47, as narrated in cutscenes by a former director of the FBI to a journalist. The game was a critical and commercial success, selling more than 2.1 million copies. It has gained a cult following and is now considered by many publications and critics as one of greatest video games of all time. The game was succeeded by a sequel, Hitman: Absolution, in 2012. 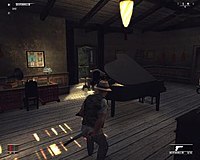 Agent 47 disguised as a security guard, sneaking up on the target, Don Fernando Delgado

In Hitman: Blood Money, the protagonist Agent 47 must assassinate his targets to complete missions. Armed guards, security checkpoints, witnesses and other obstacles attempt to prohibit Agent 47’s success. The player guides Agent 47 through the game’s levels from a third-person perspective. A map showing each topographical area and the location of targets and characters assists the player. To complete his mission, Agent 47 uses multiple methods to eliminate targets, regardless of witnesses or violence to bystanders. Blood Money penalizes players for making too much noise or being too violent.[4]

New features introduced in Blood Money included the ability to climb over obstacles, improved unarmed combat, the use of non-player characters (NPC) as shields, the ability to dispose of bodies, improved character animations, a new game engine, and the ability to upgrade weapons and equipment.[5] Seven of the featured weapons in the game, as well as assorted pieces of equipment can be upgraded.[5]

Every level in Blood Money contains a method to make the target’s death look like an accident,[5] such as tampering with a grill to make it explode when it is turned on, rigging a chandelier to fall on a target or pushing a target off a balcony. Agent 47 can improvise weapons to complete missions, such as nail guns, toy air rifles, knives, screwdrivers, stilettos, cane swords, fire extinguishers, hammers, and hedge clippers.[4]

Blood Money introduced a notoriety system that rises and falls based upon Agent 47’s success. The higher Agent 47’s notoriety, the easier it is for NPCs to identify him. If Agent 47 is captured on camera surveillance or witnessed committing murder, the character’s notoriety will rise.[6] If the player executes a mission perfectly, Agent 47’s notoriety will be minimal. Blood Money provides players with methods to reduce Agent 47’s notoriety, including destroying surveillance equipment and bribery.[6] Notoriety gained in early missions will affect later missions. The player receives payment upon completion of a mission, which can be used to upgrade weapons, or bribe authorities to lower your notoriety score.[7] The amount of money the player receives depends on how cleanly the assassination is carried out, with silent killings with no witnesses receiving the highest payout.[8]

Upon completion of each mission, a newspaper article is displayed containing the mission’s results, Agent 47’s notoriety level, the weapon most frequently used and how accurately it was used, the number of police, security, and civilians killed or injured, and the existence of witnesses. Sketches of Agent 47’s face are displayed and become more accurate as the character’s notoriety grows. Players are awarded ratings based upon the success of the mission, such as a designation of “silent assassin” when the target was assassinated as cleanly and quietly as possible.[9]

American journalist Rick Henderson visits the estate of former FBI Director Alexander Leland “Jack” Cayne, in hopes of interviewing him over an attack at the White House or his career. However, Cayne reveals that the interview was merely a ruse, and that Rick was invited to be given the details concerning a far greater story – the full details on cloned hitman Agent 47, a contract killer for the International Contract Agency (ICA), a global organization involved in assassinations. Although skeptical over the existence of 47, who is deemed an urban myth, Rick decides to listen to Cayne’s story, reading documents he provides about a number of contracts committed by 47.

The documents reveal that after 47 had committed an assassination against a bankrupt amusement park owner in Baltimore, Maryland, he went abroad to conduct jobs in Chile and France, assigned to him by his handler Diana Burnwood, before taking on several across the United States. During this time, the ICA found itself being targeted by a rival outfit called “the Franchise”, who soon began killing ICA agents while hunting down 47. Although 47 avoids being killed by rival assassins, Diana is forced to shut down the ICA, and divides up its remaining resources between him and herself. Cayne eventually goes on to talk about the White House attack, claiming 47 was involved in the chaos that occurred, but was ultimately brought down by his handler as the law closed in on him, and deceives Henderson saying Agent 47 stole Dr. Ort-Meyer’s cloning data to sell to the highest bidder, and that Agent 47 was working with “the Franchise” to kill the U.S. Interior secretary.

Unknown to Cayne, 47 had been made aware that the Franchise was working for a political organization called Alpha Zerox that sought to monopolize on Ort-Meyer’s cloning technology. As the current US President was planning to legalize cloning, the Franchise was hired to assassinate him so that their puppet, the U.S. Vice President Daniel Morris, would replace them. 47 found himself hired by an old acquaintance, CIA agent Carlton Smith, whom he rescued in a previous contract, to prevent the Franchise operative Mark Parchezzi III and Daniel Morris from assassinating the U.S. president in White House. With the Franchise exposed, Diana decided to bring down the outfit with a risky plan by pretending to double-cross 47 and injecting him with poison – in reality a serum to induce a state that mimics death – so that he could be brought close to those involved in the Franchise.

As his bone marrow could be used by the organization’s cloning rivals, Cayne had him prepared for cremation, and brings Rick to watch the ceremony. However, during the hasty funeral, Diana kisses Agent 47 after applying fresh lipstick with antidote. As the funeral begins, the antidote works and Agent 47 awakens, killing everyone in the church. With no witness alive, Agent 47’s identity remains a secret. With his anonymity preserved, Diana steals the Franchise’s assets to reopen the ICA.